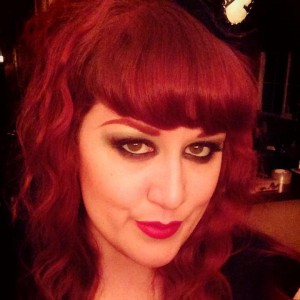 A master of the dark and macabre and designer Brooke Walters has spent over a decade practicing her craft and dedicating her herself to the art of the scare.  Each year, Knott’s Halloween Haunt gives Brooke another chance to dive into her sinister imagination and bring to life a new nightmare, drawing on her own wicked interests and desire to make people squirm and scream.  Brooke’s main talent at Knott’s is as a designer for Haunt mazes, but she has reached out to all areas of the park’s yearly event to give her special touches of wickedness.  In her time at Knott’s, Brooke has risen to the position of Supervisor of Entertainment Design, while she has personally designed a number of crowd pleasing and iconic mazes for Haunt: “Doll Factory” (2007), “Virus Z” (2010), “Terror of London” (2009), and “Trick or Treat” (2012), just to name a few.  Along with maze design, Brooke trains the horde of Knott’s monsters in “Scare School” is a key part of running the entire Haunt event and designs other shows like the pop-culture murder show, “The Hanging”.  Outside of Knott’s, Brooke works with established record labels, has produced several music videos, and has short horror film credits.  Brooke continues to produce art, keeps ties with her alma mater Chapman University School of Film and Television, and is always looking for her next victims.