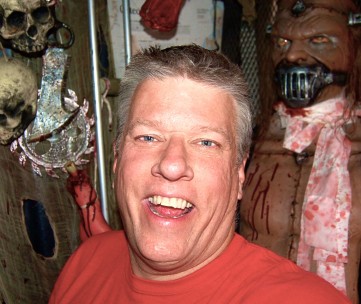 Russ McKamey is a haunt enthusiast who has taken the art of extreme haunting to a completely new level. Especially considering that this unique adventure all happens in a (not so quiet) suburb of San Diego. Indeed, all the mayhem and intensity takes place at an average sized residential home. He has been creating haunts in one form or another all of his life.

Recently his creation, McKamey Manor, was featured on an episode of the Travel Channel’s TV show “Making Monsters.” Later this season, McKameyManor will be featured on yet another Travel Channel show called “Halloween Craziest.” Being asked to be on these shows was quite the honor for a small non-profit “Mom and Pop” home haunt. This home grown haunt with the can do attitude also received stellar reviews last October from the “Los Angeles Times.” Entertainment reporter Brady MacDonald, after taking his own tour, wrote “I Like to Think I’ve Seen it All. Theme Parks, Independent Attractions to Backyard Spook-feast. From The Mundane to The Extreme. But I’ve Never Experienced Anything Like McKamey Manor.”

The haunt bug caught up with Russ as a small boy after his Dad would take him Trick or Treating. This is where he saw his first makeshift cardboard maze on someone’s lawn. He also is very passionate about acting, music, and filmmaking. During his High School and College years he majored in the Arts, and that theatrical presentation and attention to detail is very much present at McKamey Manor. Even while serving in the Navy for 22 years, he produced haunts on board Naval ships while out to sea. Now that’s dedication!

Russ, with the help of his long time partner Carol Schultz, have truly created an exciting adventure like none other. McKamey Manor has grown into an extreme haunt that will (literally) take the breath away from those who partake on this very unique tour. McKamey Manor is not a “Boo” haunt in any way shape or form. The Manor is an interactive (in your face experience) where the audience will become a major part of the show. That being said, McKamey Manor also features all the latest high tech “Bells and Whistles” for those who love haunted house special effects.

Russ and Carol have been putting together these mini extravaganzas for several years, with each year becoming more and more extreme. This one of a kind haunted attraction is created solely for the love of the haunt. The goal is to put on the craziest, most entertaining show possible for the diehard fans of extreme haunting. The price of admission is dog food which is donated to Operation Greyhound.

In what will seem like an eternity, each guest will take a terror-filled 2-3 hour tour. And to make things worse for the audience in 2013…each group will consist of only two people. There will no longer be strength in numbers. Those two lucky (if you can call them lucky), individuals will experience the haunt not as a bystander from afar, but as an actual participant. Personalized attention and terror for each of their guests is their trademark. There is no escape, and no quitting once they sign the waiver and agree to the terms. The audience truly “Lives Out Their Own Horror Movie.”

Russ and company have created a physically and mentally demanding experience for the 18 and above crowd who are looking for something different in their haunted houses. McKameyManor will continue to push the extreme envelope once again for 2013…and beyond. The haunt is currently being completely re-designed for 2013/14, and will reopen soon on a RESERVATIONS ONLY basis. McKamey Manor at that time will be open year round (weekends), when scheduling permits.

For information or reservations, please fill out the contact form at www.McKameyManor.com.