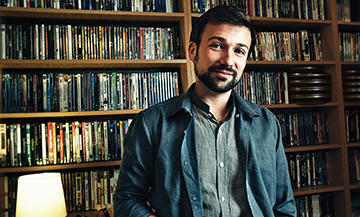 Antonio Padovan was born and raised near Venice, Italy.

In 2007 he moved to New York, where, after a brief experience in architecture, he started his career in films and commercials, dividing his time between the US, Europe and Asia. He directed commercials for companies from all around the world, including eStock Photo, Barilla and Hyundai.

In 2012, with the video Japan, Beyond (created to restore the international image of Japan after Fukushima’s events, and commissioned by Asatsu-DK, Japan’s biggest communication company) Antonio won the Stand for Japan Award and is invited to Tokyo.

His first horror short, Jack Attack (starring V/H/S’ Skype heroine Helen Rogers), won more than thirty awards, and was selected by more than fifty festivals from all around the world, including: Fantafestival in Rome, Sitges in Catalunya, Fantasia in Montreal, Melbourne Film Festival, Fantastic Fest in Austin and the New York Horror Film Festival. In Los Angeles the film was shown at the legendary Chinese Theatre. Jack Attack is distributed by Magnolia, Fearnet, RAI and Mediaset, and is released in the US as part of two feature films: Sevel Hells in 2014, and All Hallow’s Eve 2 in 2015.

In 2014, with M is from Misdirection, he was selected as one of the 12 finalists for the ABCs of Deaths 2 competition, from 548 international entries.

In 2015 he wrote and directed Eveless, a horror take on male pregnancy. The same year, with his first animation short, he won the Premio Speciale Giotto at the Giffoni Film Festival, the largest children’s film festival in the world.

He is currently in post-production for his first feature film, set to be released in the fall of 2017: a murder mystery comedy that takes place between the vineyards of Prosecco, in the hills right outside Venice, Italy.