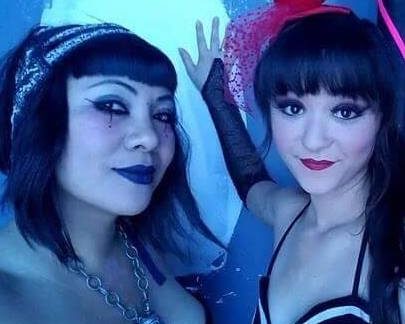 FreakShow Deluxe (FSD) was created in October 2001: just two guys and a handful of stunts performing for hundreds of people waiting in the queue of the PsychoPath Haunted Trail in Xenia, OH. In 2004, the company moved out to Hollywood, CA – and by October 2008, over 250,000 people were watching live FSD shows at haunts from Minneapolis to Long Beach, and in shows from Las Vegas to Los Angeles a month. By October 2011, FSD was entertaining over 14,000 people in a night!

Things have continued growing – FreakShow Deluxe has expanded beyond its original Halloween-themed comedy stunt show, and now boasts year-round performances! FSD “brings the sideshow to the main stage” – featuring sideshow, burlesque dancers, circus acrobats & aerialists, variety acts, musicians, and more. With more than 20 troupe members and an impressive list of associate and guest performers, FSD offers everything from the classic 10-in-1 show to full-length shows, short acts, atmosphere entertainers… even its own musical!

FreakShow Deluxe has proved its mettle as a headliner, show opener, and grounds act; performing for nearly every kind of event and venue: from fairs & festivals, to amusement parks & haunted attractions, tattoo shows & biker rallies, theaters & nightclubs, colleges & universities, concerts, historical events, private parties, public spectacles, corporate events, trade shows and the list goes on. FSD is just as comfortable in the board room as at the biker bar, with audience’s both refined and raucaus – come see how FSD can help YOU to get the perfect show for your needs and audience.