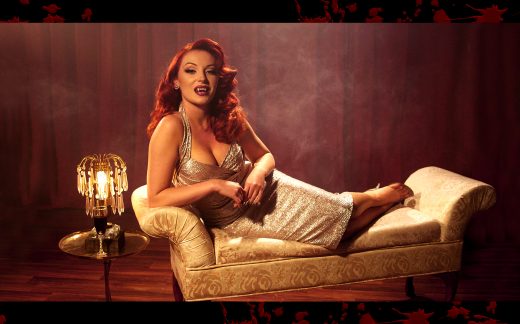 Sarah M. Palmer (a.k.a. Pinup Palmer) plays Victoria, Goddess of the Underworld in the upcoming horror comedy film Vampire Dad. Sarah has danced and scared in horror events for nine years. Besides performing as Marilyn Monroe and other characters at Universal Studios Hollywood, she recently wrapped filming a pilot for Funny Or Die called “Half of Heroes” and currently models for numerous vintage clothing lines like Pinup Girl and Heart of Haute. She also recently modeled for Pinup Girl’s new clothing line launched by Elvira. Sarah has performed and modeled for IMATS and Monsterpalooza as multiple creatures and monsters, with looks created and applied by special effects artists from Syfy’s Face Off. She has been a cover girl for vintage car magazines like Ol’ Skool Rodz and Car Culture Deluxe, even featured twice in the same magazine using two different characterized looks. She appeared on the Chiller network every Halloween playing Sandy in the short horror film “Chilling Visions: 5 States of Fear.” Sarah has been called a witch—she does practice basic crafts such as tarot card readings, crystal energy, saging, and of course, she owns a black cat!