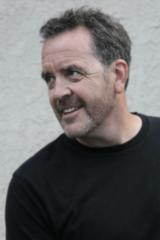 Years ago, writers/producers Michael Hayes and Brian Lubocki approached ADI to break down and budget their project, Fire City. It was the creature effects studio’s first introduction to the massive world of demons living side-by-side with humans, unaware of their deadly presence. And they knew it was going to add a dramatic new take on the world of cinematic demons. The project was massive and the filmmakers wisely chose to creature one singular demon character for a promotional short.

But Woodfruff was hooked on the world. Beyond creating creatures, he felt this was a project that would work with the kind of story-telling he envisioned delivering as a director. And he found a sympathetic ear among the producers who went to length to provide a showcase for Woodruff to delve into directing through a short film, King of Miseries. From the success of this experience, the team took the results directly to the fans. Crowd-funding through Kickstarter and calling in all favors, the door to Fire City was finally opened with the feature-length Fire City: The Interpreter of Signs.

With the film now in post-production, the filmmaking team once again reaches out to the fans of demons and monsters with a test screening at this year’s ScareLA. Far from complete, now is the time to see if the basic elements are in place. Before final sound and music… before VFX tweaks and sweetening the picture… the fans will get a chance to see if they can tap into the suspense and story; and at its heart, the characters of the demons of Fire City: The Interpreter of Signs.