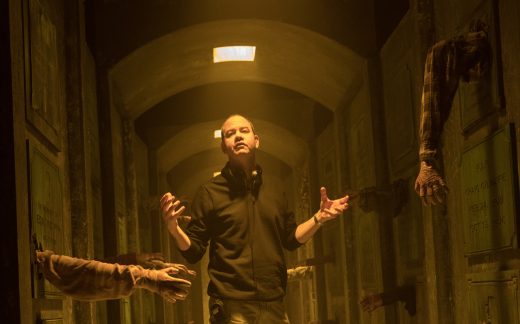 Gregory Plotkin is a Los Angeles native who grew up enamored with the film industry, specifically editing and directing.  He graduated from UCLA with a Bachelors degree in English and started his editorial career assisting on such films as “Pleasantville,” “The Insider” and “Pay It Forward.”  He made the transition to editor by associate editing the features “Friday Night Lights,” “Dreamer” and “Fracture.”  Greg made his studio debut as lead editor on the 2009 feature “Untraceable” starring Diane Lane.  He then went on to edit the feature film “Paranormal Activity 2” for Paramount Studios and Blumhouse Productions.

In 2014, Greg made his directorial debut on the short Virtual Reality film “Black Mass.”  The film was shot using the cutting edge technology of the Jaunt VR camera for an immersive virtual reality horror experience.  Greg directed his first feature film, “Paranormal Activity: The Ghost Dimension,” which was released by Paramount Pictures on October 23, 2015.

2017 saw Greg jumping back into the editing chair on the feature film “Get Out” for Universal Studios / Blumhouse Productions.  The film was actor Jordan Peele’s feature directing debut and was both a commercial and critical success.  He immediately went on to edit the feature film “Happy Death Day” for director Christopher Landon and Universal / Blumhouse Productions.  Greg most recently cut the New Line feature “Game Night” for directors John Francis Daly and Jonathan Goldstein.

Meet the director of the highly anticipated new movie HELL FEST, from CBS Films/Lionsgate, in theaters September 28. A masked serial killer turns a horror themed amusement park into his own personal playground, terrorizing a group of friends while the rest of the patrons believe that it is all part of the show. College student NATALIE […]