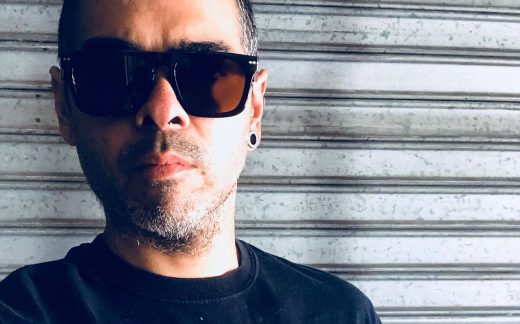 Adrian Marcato is the creative director and co-owner of Los Angeles’s premiere extreme horror simulator H E R E T I C HORROR
Born and raised in Los Angeles California, His mother worked in entertainment law and his father worked in the pharmaceutical industry.
Adrian was exposed to visceral and intense horror from an early age as his father was a rabid horror fanatic. He started writing short horror stories and playing with fake blood at the age of 13 scaring his mother on one occasion by holding a broken piece of glass with a bloody hand. In 2005 he started working as security at Knott’s Scary Farm during the halloween season and worked his way into being a monster scare actor. in 2009 a friend called Adrian to do make-up FX on a short film. It was a simple gag of a throat being slit open and it was that gig that pushed Adrian to work in the FX field after doing his own make-up FX on various personal projects. It was then that he would do full prosthetic zombie make-up and have his friends drop him off on Hollywood Blvd and watch as he would walk around freaking people out.
After working on FX for several projects including a Disney pilot, Hatchet 3 and VHS 3 as well as working on seasonal haunts LA HAUNTED HAYRIDE, DELUSION he started writing a script about the mysterious death of his friend. The working title was  “HERETIC” (Named after the guilty pleasure film EXORCIST 2: THE HERETIC) and was about the murder of a young girl by a sick and vicious group that wanted to use her body as a vessel for a creature. The 170 page script made the rounds but at that time horror was not as popular it was rejected. In 2012 Adrian turned the script into a theatrical play then changed it into a physical walkthrough haunt. He convinced his wife and business partner to turn their home into a house of horrors for a beta test in November of 2013.
Seven people came through the test, Three special FX artists from Halloween Horror Nights, A script writer for Master of Horror which had been on Showtime and some of Adrian’s friends from the film industry. All of the reviews were positive and one guy was so scared he was in bed for 3 days after attending.
Since it’s inception H E R E T I C HORROR has traveled to England and Switzerland, Amsterdam as well as doing private shows for elite clients for Sony Pictures, Royalty and Celebrity fans.
Adrian Marcato (Statement taken from an interview)
“When I started doing this show there were not a lot of other specialized haunts out there. It was new and I was doing it all alone, the marketing,writing, producing, make-up, casting, directing etc. I never thought it would take us this far and currently I am the only one who can create something this visceral and unique with any size budget. My wife and I started this business with nothing all out of our pocket and with no hope or expectations it would succeed but we have fans all over the world and people have tattooed themselves with our logos. It means the world to me that it found an audience and we pushed each other to keep it going. Growing up with a strange background (My mother is Mexican-American and my Dad’s side is from Oxford England) I always felt like an outsider so horror was something that I got lost in when I read it, watched it and would write it. Heretic is a show that can adapt in any space, with any constraints or restrictions, any location and thrive on no budget. We do this out of love for the genre and our creative voice.”

From the intimate and personal to the elaborate and expansive, immersive horror can use many different forms to scare you during an experience. Meet four companies that take varied approaches to this artform, but all succeed in haunting you far after an experience as ended. We’ll discuss how they found their voice, what inspires them, […]