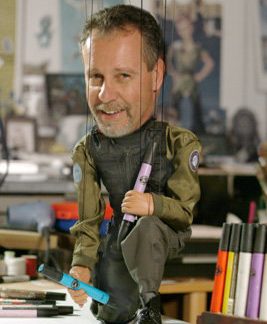 Charles is a co-chairman and head of production design. From storyboarding to final finishing, his job is to develop and oversee the art direction of all projects. Charles graduated from Pratt Institute in 1974. Pursuing an illustration career, Charles landed a graphic artist position with ABC Eyewitness News in New York. After four years, he left to work in Virginia as production designer for I Go Pogo, a clay animated feature based on the Walt Kelly character. After Pogo, Charles and his brothers headed to Hollywood.
Through the 80’s, Charles further developed his skills on low budget monster movies designing creatures big and small. For Shelley Duvall’s Faerytale Theater, he designed a wide array of props and miniatures for various directors including Tim Burton and Francis Ford Coppola. Working closely with the brothers he brought a unique look to their award winning, After School Special, Cousin Kevin, and the cult classic feature, Killer Klowns from Outer Space.
For director Jon Favreau’s ELF,  Charles headed the team of artists and designed a 60’s stile stop motion look for the opening titles and North Pole sequence. Most recently for Team America, he made sure that the marionettes looked their best when they saved the world.
Now, Charles keeps busy developing original Chiodo Bros. properties and characters, always with that childlike sense of wonder that affected him so many years ago. He does what he did as a kid and hopes it will inspire young filmmakers for years to come.